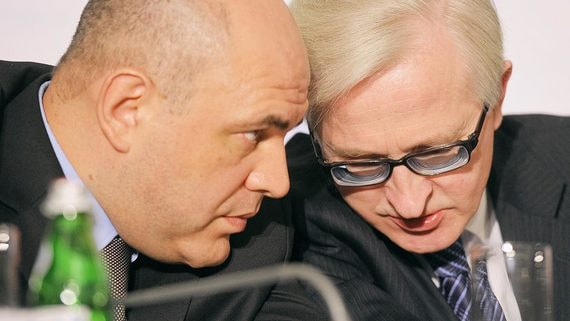 The Russian Union of Industrialists and Entrepreneurs urged Mishustin to protect large companies from losses as a result of joining the global tax reform. Otherwise, there is a threat to pay taxes on foreign budgets for the extraction of natural resources

Large Russian companies have asked Prime Minister Mikhail Mishustin to protect them from the consequences of the tax reform of the Organization for Economic Co-operation and Development (OECD). Alexander Shokhin, President of the Russian Union of Industrialists and Entrepreneurs, sent a proposal to the relevant ministers to actively defend the interests of companies on the OECD platform (Vedomosti has his letter). The reform, according to the head of the business association, could lead to the payment of taxes on Russia’s use of mineral resources abroad. Shokhin believes that this risk is one of the main ones. It can be seen that the wording of the Pillar 1 mechanism (one of the two pillars of the reform, along with Pillar 2) does not take into account the peculiarities of the mining business.

A representative of the government apparatus, in response to a query from Vedomost, said that he had received a letter from the Russian Union of Industrialists and Entrepreneurs, which would be examined in due course. The Ministry of Finance and the Federal Tax Service did not respond to a request from Vedomosti.

Many Russian groups are vertically integrated: from the direct extraction of minerals to the sale of their processed products (metal products, petrochemicals, etc.). In addition to the development of the land, home businesses also acquire natural resources in a different way (cutting, extracting water resources, etc.). To protect this integrated business abroad, it is necessary to have the broadest definition of extraction activities, but at the same time clear, to avoid conflicts when using regulations in practice.

In addition, the threshold for the use of Pillar 1 (only farms with a turnover of more than € 20 billion are eligible) for diversified groups should be excluded from mining and financial activity. The OECD presented a joint position of 131 countries, including Russia, on the issue of tax changes on 1 July. The rules of the game are expected to change in two ways.

Initially, this measure was intended to be extended primarily to IT companies, but for publication, the organization decided not to limit it to certain industries, but to expand it everywhere: to any international business group (MGK). Only mining and financial companies were removed from the mechanism. In fact, Pillar 1 leads to a fairer distribution of tax flows, where MGK earns money, as countries of sale can claim about 20-30% of their income taxes.

It is perfectly fair to tax mining in the country where most of the profits of mining companies are mined, believes Sergei Kalinin, Egorov Puginsky, head of partners and tax practices at Afanasiev & Partners. In this regard, it is important to differentiate between the global computing giants and mining companies, which he originally intended to be a pillar of.

Although the technical details of the rules in column 1 have not yet been developed (the text of the relevant multilateral agreement is expected to be published in early 2022), the final OECD statement can be inferred in some cases from segmentation. The complaint will be acceptable, believes the member of the Department of Taxation and Law “Deloitte” CIS Natalia Kuznetsova. As we understand it, this will allow us to exclude “extraction” of items, both from the calculation of global turnover and from the amount of excess profits, he added. Experts still hope that radical measures will not be necessary, such as restructuring the mining segment separately from existing business groups, the expert summed up.

Kalinin added that the possibility of avoiding the final rules of columns 1 and 2 or avoiding similar tools would be ruled out. It would be more appropriate to raise the issue of some exceptions in the rules of the mechanisms themselves with regard to the profits of the extraction companies, he noted.

Within the framework of the 2nd column mechanism, companies are concerned about the preferential tax regimes established by national legislation – SPIC, SEZ, SAR, TASED, the benefits of intergovernmental agreements, etc., wrote Shokhin Mishustina. Many entrepreneurs started their investment projects in the hopes of helping them get started, which could take decades, recalls the president of the Russian Union of Industrialists and Entrepreneurs. It is necessary to exclude such schemes from column 2, or to compensate the business for losses, for example, through targeted subsidies, he suggests.

The second direction or 2nd column basically consists of three parts. The first is to adjust the tax rates between countries to a minimum level of 15% (Income Rule, IIR). In particular, if the effective tax rate in the individual jurisdictions represented by MGK is lower than the minimum tax, then an additional fee will be created to compensate for this difference. As a general rule, it is paid in the country of registration of the parent company. The second part of column 2 is to equalize the differences in the retention rates of the international horn groups, in fact, to increase the level of almost 9% in almost all types of payments, except for dividends (subject to the Tax Rule, STTR). . The third part of the mechanism ensures that the IIR rule will work. For one reason or another, if the country withdrawing the capital has not received any compensation for the corresponding income tax, it has the right to effectively block the transfer of payments from the parent entity to foreign subsidiaries. The mechanism will include a group with a total revenue of 750 million euros. The new rules are expected to be implemented in 2023.

Galina Naumenko, PwC’s tax and legal partner, believes that column 2 could affect international groups, such as a company operating in Russia and that all its profits are taxed at a preferential rate. Moreover, in this case, it does not matter what the turnover of the subsidiary in Russia is; the most important thing is that the total global holding company has more than 750 million euros in revenue, he said. The jurisdiction of the parent company of the group will tax the profits of the Russian subsidiary up to a limit of 15%. Of course, it is better to release such preferential regimes (TASED, SEZ, SPIK, RIP, etc.) in principle. But, Naumenko warns, if this is not achieved, then it is more profitable to raise the tax rate to a minimum value and at the same time provide subsidies to offset the higher burden. In his view, it is unlikely that the OECD will consider this a “trick”, as in this case the entire system of subsidies in the countries involved in global reform will have to be examined and jeopardized, including those that were introduced. before the reform.

Grants will become one of the opportunities to help important sectors of the economy if they do not agree with the OECD to remove them from the general rules, Kalinin acknowledged.

The risks of joining the 2nd pillar of Russia’s priority regime need to be calculated, but the first approach does not seem material, Finance Deputy Finance Minister Alexei Sazanov told Vedomosti earlier. First of all, the overall income tax rate in Russia is 20%, so even if it has the privileges of any division of the group, Sazanov believes that the farm will generally meet a minimum limit of 15%. Secondly, under the turnover of 750 million euros, not so many farms are included, and most of the users with preferential treatment do not exceed this filter.